The past week was particularly eventful, and that’s reflected in the overall performance. The total cryptocurrency market capitalization is up almost $100 million as most of the coins are well in the green. Let’s unpack.

Starting with Bitcoin, it’s up 5.2% over the week and is currently trading around $24,000. This time last week, the cryptocurrency was hovering around the $23K area, where it remained until Monday, when the price took off and reached $24K. The euphoria was short-lived, however, as the bears were quick to push BTC back below $23K on Wednesday. The correction was also for not as the price recovered rapidly above $24K and even pushed towards $25,000 yesterday.

The last move might have been propelled by an announcement that BlackRock – the world’s largest asset manager – is set to begin offering direct exposure to Bitcoin for institutional investors via a private BTC trust product. In any case, at the time of this writing, the price has withdrawn slightly below $24K.

Elsewhere, Ethereum’s ecosystem continues to flourish on the back of even more news about the Merge. Core ETH developers agreed that the event could happen even sooner than anticipated – on September 15th rather than September 19th, as was previously expected. The news came after the successful merge of Goerli – the final testnet before the Merge.

As a result, ETH is up a whopping 17% over the past week, trading at slightly below $1,900. It appears that it’s only a matter of time before the cryptocurrency tests the coveted $2,000 mark.

In light of the above, it’s also worth noting that the co-founder of MakerDAO, Rune Christensen, proposed to remove all the USDC from the DAI stablecoin peg stability module and buy ETH instead. That’s worth $3.5 billion. Vitalik Buterin argued that it’s a terrible idea.

Other cryptocurrencies also performed very well in the past seven days. Polkadot is up 14.2%, Avalanche is up 22.3%, LIDO is up 16.6%, and so forth. In any case, it remains very interesting to see how the industry will shape up during next week, as we’re moving closer to the Merge. 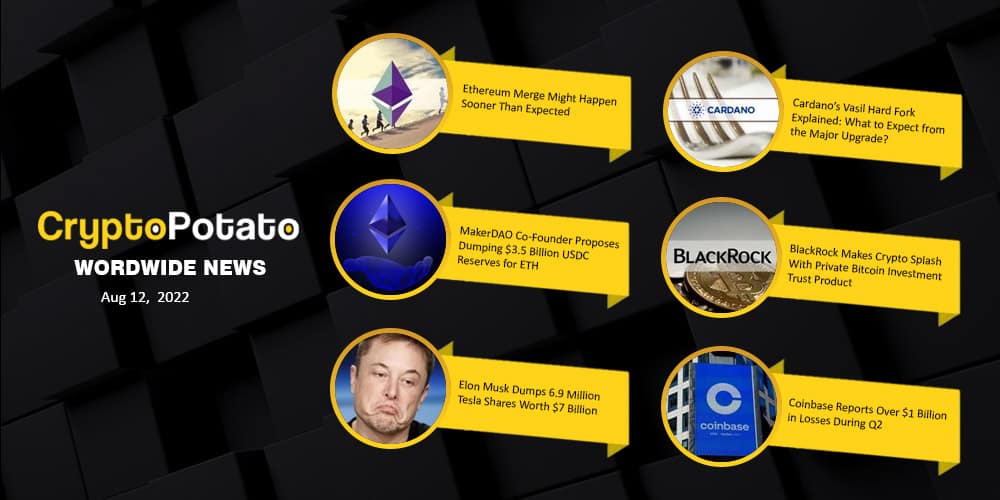 Ethereum Merge Might Happen Sooner Than Expected. The long-anticipated transition of Ethereum from a proof-of-work (PoW) consensus algorithm to a proof-of-stake (PoS) could happen sooner than expected. The new date is set for September 15th, barring any unforeseen circumstances.

Cardano’s Vasil Hard Fork Explained: What to Expect from the Major Upgrade? Vasil represents a major protocol upgrade for Cardano, and it’s a highly-anticipated hard fork of the network. Here’s everything you need to know about it and when it might come to fruition.

MakerDAO Co-Founder Proposes Dumping $3.5 Billion USDC Reserves for ETH. Rune Christensen, the co-founder of MakerDao, recently proposed to remove all the USDC from the DAI stablecoin’s peg stability module. Instead, he suggests to used the USDC to buy ETH. Vitalik Buterin thinks this is a “terrible idea.”

BlackRock Makes Crypto Splash With Private Bitcoin Investment Trust Product. The world’s largest asset manager – BlackRock – is set to start offering direct exposure to Bitcoin for institutional investors. This will happen through a private BTC trust product and represents a major move from the company. The product is aimed at investors in the US.

Coinbase Reports Over $1 Billion in Losses During Q2. The leading US-based cryptocurrency exchange, Coinbase, reported over $1 billion in losses during the second quarter of 2022. Per the document, the trading volume declined by over 30%, leading to a loss in overall transaction revenue of around 35%.

This week we have a chart analysis of Ethereum, Binance Coin, Cardano, Solana, and Avalanche – click here for the complete price analysis.